Foam cakes are fluffy airy cakes. They all have a common base. The main ingredients are eggs (batter method – whole egg beaten or foam method – white and told beaten separately), sugar, flour and sometimes butter or oil and leavening agents…

History: Invented in 1927 by a Los Angeles insurance agent and sold to Hollywood stars. The novelty was the use of vegetable oil instead of butter.

A foam cake without vegetable oil or butter.

History: The first recipe of the sponge cake is found in 1615, in Gervase Markham, an English poet book, The English Housewife. Or how to be a complete woman 😉 It is believed to be one of the first non-yeasted cakes. 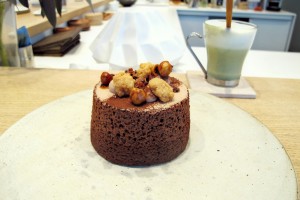 Chocolate and hazelnuts angel cake from Pâtisserie Ciel in Paris.

The “food of the angels”, the feather-light cake has no fat. No egg yolks, no fat and no leavened. Egg whites is the principal ingredient and it is baked in a ring-shaped tube pan and the heart of the cake garnished with fruit, cream…

History: Angel cakes became popular in US late 19th century and was a traditionally an African-American post-funeral meals.

This French version of the sponge cake doesn’t contain fat and eggs are beaten separately. It often uses potato or corn starch.

History: Probably one of the first French cakes. It was ordered in 1358 by the county Amédée VI of Savoy for the visit of the Emperor Charles IV of Luxembourg. To please the emperor a cake light as feather was asked to the cooking chef (maître queux) Pierre de Yenne.

History: From the city of Genoa, the capital of Liguria in northern Italy